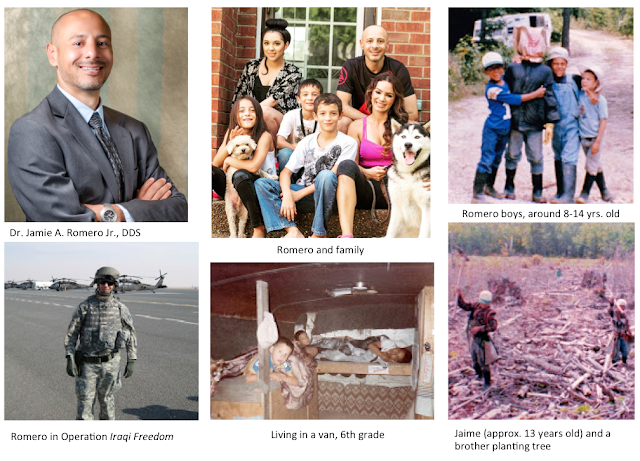 
What do you get when you combine a helicopter pilot, an oral surgeon, and an ex-migrant tree planter? You get Dr. Jaime Romero Jr., a hard-working, adventurous father of four who loves to give people their smile back at Solace Oral Surgery. His success has not been easy or instantaneous, but rather marked by determination and love for family and country.


Dr. Jaime Romero was born in the United States but, as a child, moved to Mexico to be raised closer to his grandparents. When he was twelve years old, his father wanted to follow his dream of higher education, transplanting the family of six across the country near a college in Mexico, south of Texas. When things did not go as planned, the family of six had to live in their van while they sought more permanent housing. This turned to permanent homelessness and hardship and his father left school to plant trees in Mississippi and Tennessee. During this change, his father got very sick, so Jaime, the oldest of four children, had to stop his schooling to help the family by planting trees. For the next five years, Jaime did not attend a traditional school but taught himself math and science from simple books.

Then everything changed. Jaime’s grandfather made him promise that he would go back to school to have a better life. Jaime, having huge respect and love for his grandfather made him this promise. Two weeks after this, Jaime’s grandfather died unexpectedly. This was a turning point in Jaime’s life. Jaime made good on his promise and going back to school. He attended an alternative high school in Savannah, TN, where he worked off his tuition. Because his grades were so good, he graduated and attended college the following year. “I was taking college classes like algebra, biology, and chemistry, but” unlike his college classmates, “I had never taken these classes in high school before,” he said. He was up for the challenge. He worked very hard and keep determined. And, both he and his father realized their dream of graduating college together.

Jaime’s love of country and the benefits for college tuition prompted him to join the Army ROTC, eventually learning to fly helicopters for the Army. As soon as he was done with flight school, though, he was accepted into dental school. He transferred units to the Dental Corp. and was then deployed to Iraq in Operation Iraqi Freedom. Soon after his return in 2008, he was accepted into the Oral and Maxillofacial Surgery residency program at the Cleveland Clinic in Cleveland, Ohio.

With the love and support of his wife, Eva Angelina, and their four children, Dr. Romero has the joy of listening to his patients and giving them their smile back. In 2013, he opened his own practice at Solace Oral Surgery in Nashville, TN, where he does not take the trust of his patients for granted. He especially loves full-smile reconstruction and placing implants. “When the patient looks at you and smiles, they get emotional,” Dr. Romero says, “And we do, too.”

The future of Solace Oral Surgery is bright. The practice has grown since opening in 2013 and is now expanding. Dr. Romero would love to expand the practice without losing that personal connection he has with his patients. His love for education also extends to his patients, where his blog and website provide additional information for patients to make informed decisions about their care.
Dr. Romero also likes to give back to the community. He and his wife Eva are involved in numerous charitable organizations that are close to their heart. He loves to inspire youth and help others in need. In 2014, Solace Oral Surgery had a “Smile for Christmas” giveaway which provided a new smile for someone in need.  At Solace Oral Surgery, the phrase “All that is good begins with a SMILE” is put into practice.

Dr. Romero has advice for students and others who want to pursue their dreams. First, he says to never give up but to persevere with hard work. Second, he says to be fearless of failure. “Failure is a way for us to grow. The journey, even if you fail, will be worth it. And you can learn from the mistakes of others.” Lastly, he says not to listen to negativity, “If you have a dream and a passion, if you are driven and work hard, then the sky’s the limit. Don’t take ‘no’ for an answer.”
Solace Oral Surgery is located at 207 23rd Avenue North, Nashville, TN 37203. More information is on the web at www.solaceoralsurgery.com or call (615) 320-1392.

Posted by EvaCo Blog: Live Inspired. Live in your American Dream at 8:18 AM